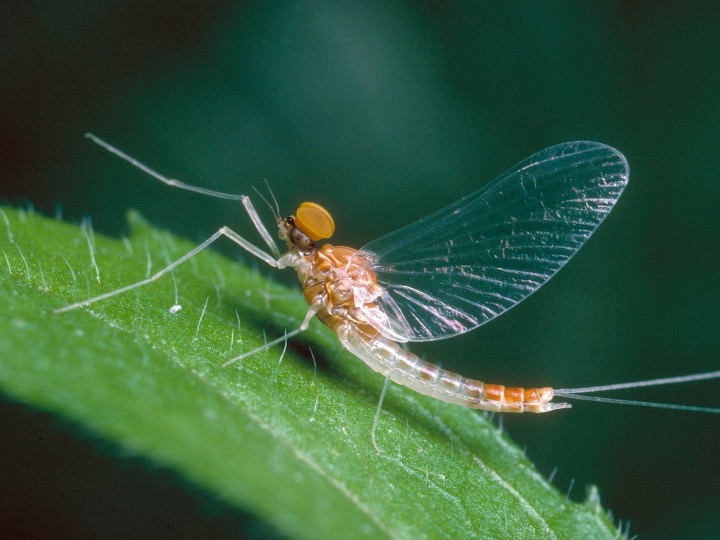 If you’ve ever hiked along a woodland stream on a warm spring day when the sun is low in the sky and the light is beginning to fade, you may have witnessed mating mayflies. These tiny creatures — some no bigger than a match head — swarm together, their translucent wings fluttering in a midair dance. Once mated, each female descends onto water, where she lays hundreds, or even thousands, of eggs. With her mission to bring new life into the world now complete, she dies. Without any mouth parts, fully mature adult mayflies, called spinners, cannot eat, and so most live but a single day. That’s why they have the insect order Ephemeroptera, which in Latin means “briefly winged.” 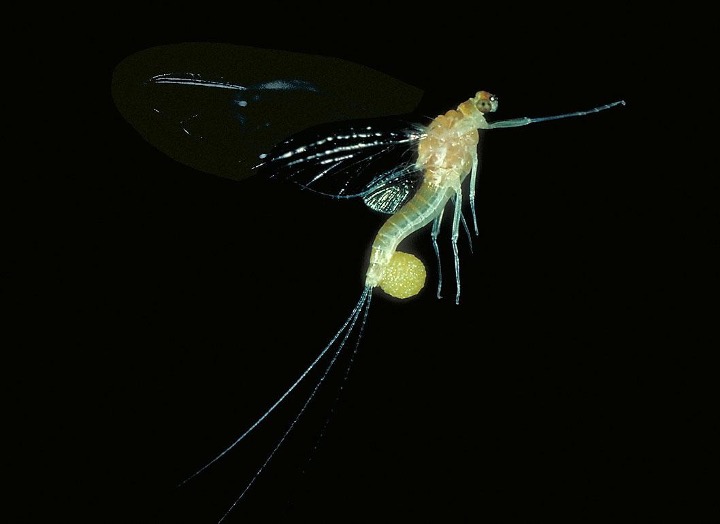 After mating, female mayflies like this one extrude a ball of eggs while hovering over the stream. When the ball is complete, they drop to the water surface and release it. Photo: Dave Funk, Stroud Water Research Center

It’s a day that is a long time in the making. Mayfly eggs hatch within minutes, days, or weeks. As nymphs, they usually spend a year in their freshwater ecosystem, feasting on algae as well as the leaves, branches, and other plant debris broken down by bacteria and other decomposers. Some mayfly species eat other insects, but most only eat plants. Plant eaters are called herbivores. “Herb” is from the Latin word meaning “plant,” and “vorus ” is from the Latin word meaning “devour.” As nymphs, mayflies undergo a series of molts. This is when they shed their exoskeletons. On the eve of mating day, they emerge from the surface of the water and use their newly appeared wings to fly to a resting spot on land. The next day, they molt once more and fly to the swarm site. 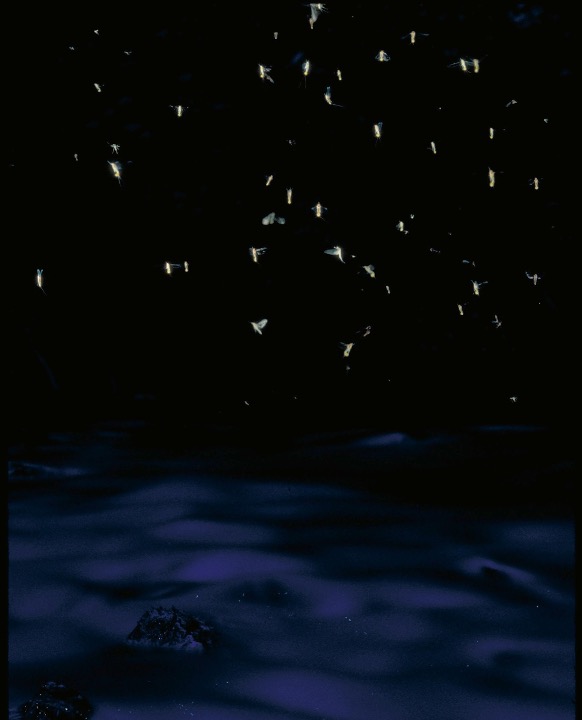 Many mayflies swarm around dusk. This species flies over the stream until dark. Photo: Dave Funk, Stroud Water Research Center

Mayflies are highly sensitive to pollution and other changes in their environment. When they are missing or few in number, it is a warning that a stream isn’t healthy enough for mayflies to live there. Scientists at Stroud Water Research Center monitor the presence or absence of aquatic macroinvertebrates like mayflies in streams and rivers throughout the world. In doing so, they have made important discoveries like the River Continuum Concept, which looks at a river and its surrounding watershed as an interconnected system. This concept recognizes that the changes that happen on land and upstream have an impact on what happens downstream. 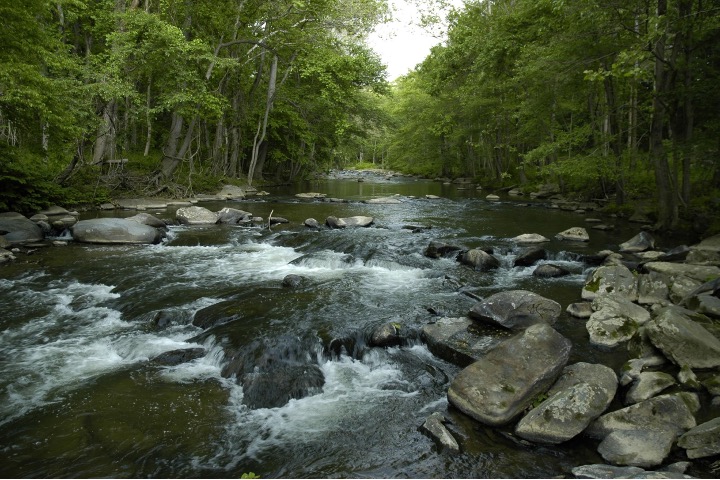 A stream in Delaware with a healthy riparian forest on its banks. Photo: Dave Funk, Stroud Water Research Center

A common cause of unhealthy freshwater ecosystems is a lack of trees and other plants along the banks, in an area called the riparian zone. Trees not only provide an important food source for mayflies and other species. They also keep streams cool by shading the water. They filter pollution like nitrogen, phosphorus, and sediment that can wash off roads and fields into streams when it rains. And they reduce flooding.

How to Monitor Your Local Stream

To learn about the health of your local stream, and if mayflies can be found there, check out the WikiWatershed.org online toolkit:

Model My Watershed: Analyze data, model storms, and compare conservation or development scenarios in a watershed.

Runoff Simulation: See how changes in rainfall amount, the surfaces on which the rain falls, and soil texture change where the water goes.

Leaf Pack Network: Discover what aquatic insects can tell you about your stream’s health by performing a simple leaf pack experiment.

Diane Huskinson is the communications manager and editor at Stroud Water Research Center. She is responsible for communicating how the Stroud Center is fulfilling its mission to advance knowledge and stewardship of freshwater systems through global research, education, and watershed restoration.