Have you ever heard someone say, “Clouds are just water vapor”? Next time, you’ll be able to correct them.

While it’s true that clouds contain water, they actually aren’t made of water vapor. If they were, you wouldn’t be able to see them. The water that makes up clouds is in liquid or ice form. The air around us is partially made up of invisible water vapor. It’s only when that water vapor cools and condenses into liquid water droplets or solid ice crystals that visible clouds form. 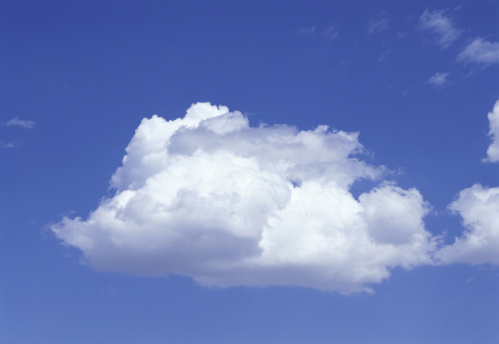 A cloud on a sunny, fair-weather day.  Image: Purestock/Thinkstock

So how does that water get up into the sky? Consider the water on the surface of Earth—that means the oceans, lakes, and streams but also the soil and even the drops and puddles that collect on leaves, buildings, and rocks. Remember that water is made up of tiny particles and that those particles are in motion.

As long as the air above isn’t completely saturated with water vapor (meaning it has less than 100 percent humidity), some fraction of the particles in the liquid water have enough energy to “escape,” and they can rise into the air above the surface and evaporate. The warmer the water is, the more thermal energy the particles have. On average, as the temperature increases, the number of particles with enough energy to escape into the air increases. Likewise, the drier the air, the faster the water can evaporate.

Another important source of water vapor is plants. Plants draw water through their roots, stems, and leaves by regularly letting water vapor and other gases out of the pores (tiny holes) in their leaves. Because of the tendency of water particles to stick to each other (called cohesion), as this water exits the plant, it draws up the water behind it. This allows the roots to take in more water from the soil. The release of water vapor by plant pores is called transpiration. Together, evaporation and transpiration contribute the water vapor in the air that can eventually form clouds.

Warm, moist air is less dense than the air around it, so it begins to rise higher into the sky. Wind can also push the parcel of air containing the water vapor to higher elevation or up the side of a mountain. Air temperatures tend to decrease the higher you go in the atmosphere. This is because the pressure decreases as you go higher, allowing the air to spread out and become thinner and, therefore, cooler.

Eventually, when the water rises to an elevation where the temperature is cool enough (the dew point, or point of saturation), it will start to condense into liquid form.

So if clouds are liquid or solid water, why don’t they immediately fall out of the sky as rain or snow? Think about the fine dust particles you can often see floating in a shaft of light. These particles are solid, but their mass is so small that they remain airborne with even the slightest of updrafts; that is, until they collide and merge with enough other particles that they get big enough to fall. Similarly, the liquid droplets or ice crystals making up clouds are tiny enough to stay aloft. Only when enough collect and collide to form larger droplets do they begin to fall as precipitation. 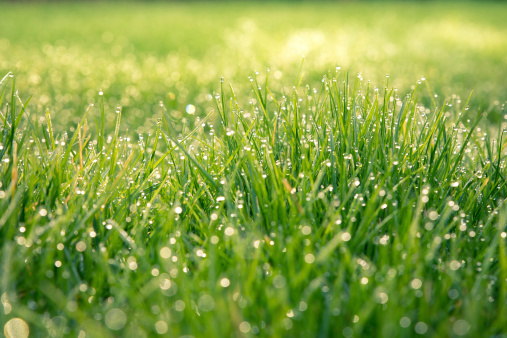 Dew is liquid water that condensed from water vapor onto cool surfaces, often overnight when the temperature tends to drop. Image: John Kelly/Thinkstock

While the basic concepts of cloud formation apply to all clouds, everyone knows that no two clouds look exactly alike! However, meteorologists use a classification system to group clouds into types to help them understand and predict their effects on the weather.

You’ve probably heard some of the Latin names for cloud types. The most common one is cumulus, referring to the popular puffballs. While some of the names can be rather long and complicated, they have some basic components that will help you break them down. 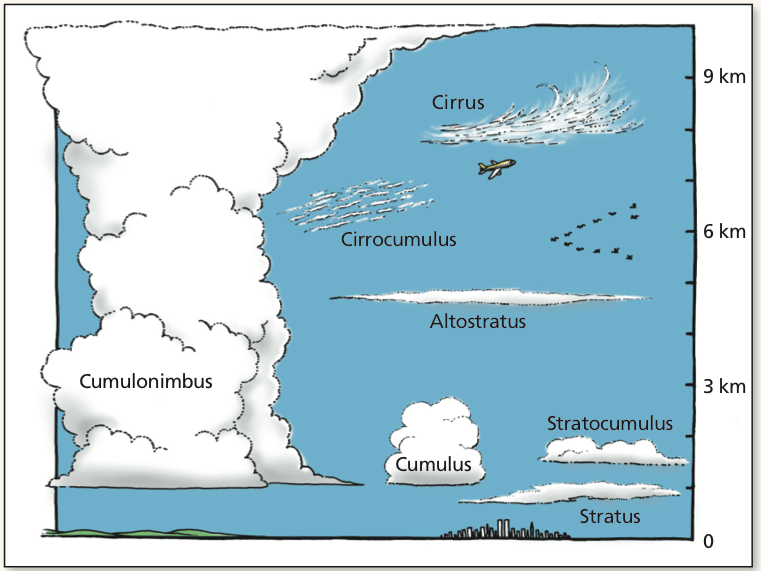 Look at some of the cloud types and their names in the illustration above and see if you can figure out how they might form and what kind of weather they might bring.

This is an excerpt from the Weather and Climate Systems unit of our curriculum product line, Science and Technology ConceptsTM (STC). Please visit our publisher, Carolina Biological, to learn more.

Clouds
Extending Your Knowledge
Subscribe to our RSS FEED